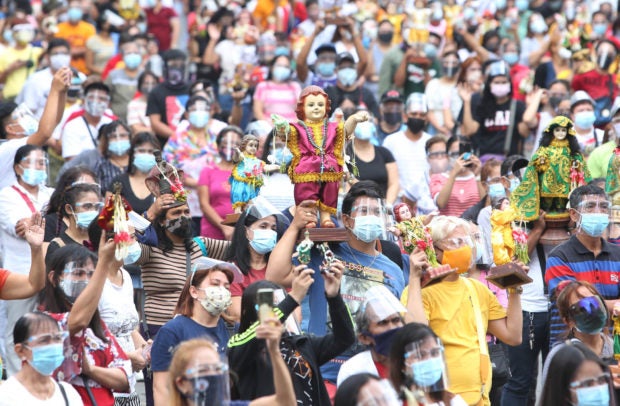 MASKED CELEBRATIONS Thousands of devotees turned up at a Mass in Tondo, Manila, during the Feast of the Sto. Niño (Child Jesus) on Jan. 17 this year, wearing masks and face shields. —MARIANNE BERMUDEZ

MANILA, Philippines — Christianity was introduced to the Philippines 500 years ago, the faithful have found ways to weave the Filipino culture into their expression of faith, particularly through religious festivals or fiesta — joyous occasions that fill communities with color, hope and a sense of unity.

“Although Christianity — the prayers, rituals and devotions — comes from Europe, the past 500 years have shown that the Filipino people have not only embraced Christianity; we have given it a ‘Filipino flavor,’” said former Manila Archbishop Cardinal Luis Antonio Tagle.

In “Fiesta: Ang Makulay na Pananampalatayang Pilipino,” a documentary film produced by Jesuit Communications to commemorate the 500 years of Christianity in the country, some Filipino festivals and traditions are celebrated and examined more closely.

First released online on April 5 and streamed live free of charge on social media on May 23, the film emphasizes how popular piety quickly became a concrete and universal symbol of expressing one’s faith through culture.

Although some see it as a form of fanaticism, popular piety or popular devotion has been recognized in the Second Vatican Council as an authentic expression of faith that “avails of certain cultural elements proper to a specific environment capable of interpreting and questioning in a lively and effective manner the sensibilities of those who live in that same environment.”

During the yearly Ati-Ati Festival in honor of the Child Jesus at Ibajay town, Aklan province, devotees smear charcoal on their faces and bodies “to show God that they are sinners,” with the celebration made livelier by shouts of praise and dance rituals.

This, according to Ateneo de Manila University professor Ricardo Abad, puts participants in a trance.

“They lose themselves in the trance. Time stops,” he said. “There is a surge in energy; they’re on a high. And while on a high, they feel close to God … It’s a religious experience.”

The Feast of the Black Nazarene, perhaps the most well-known form of popular piety in the Philippines, draws millions of devotees to the streets of Manila every Jan. 9, when they participate in a tradition that often extends beyond 20 hours.

“Traslacion,” or the grand procession of the image of the Black Nazarene from Quirino Grandstand to Quiapo Church, requires months of preparation, according to the church rector, Msgr. Hernando Coronel.

“The preparation for this is extensive. It’s mesmerizing,” Coronel noted. “This involves millions of people—where [does] their faith come from? We Filipinos draw strength in numbers.”

For hours, the devotees, most of them barefoot, wave white towels and fervently pray for their wishes to come true, as they get drawn into a sea of people hoping for even a glimpse of the venerated image.

And once they do, their eyes fill with tears while their hearts swell with gratitude.

This intense display of their emotions—which is also seen in “cenaculo” plays and “pabasa” rituals during Holy Week—is sometimes viewed as fanaticism, said Rebecca Cacho, College of Arts and Sciences dean of St. Scholastica’s College in Manila.

But she argued that this passion was ingrained in the lives and culture of Filipinos, who see a need to “feel something” to properly express their connection with others.

“Some people say it’s fanaticism; to them it seems theatrical. But it isn’t. If we look at it closely, this is how we love. This is how we make others feel our connection with them,” Cacho said.

Abad also explained that this strong devotion to the Black Nazarene concretized the faithful’s struggle of finding solutions amid challenging times in their lives.

In 2020, the faith of Filipinos was put to the test by the pandemic, which also brought to a halt all festivals as authorities banned all forms of public gatherings to prevent the spread of COVID-19.

Catholic devotees, forced to remain inside their homes due to quarantine restrictions, heard Mass and participated in religious traditions either virtually or through social media.

For this year’s Sinulog Festival in Cebu City, all physical events were canceled, as the faithful were encouraged to instead watch a collection of performances dating as far back as 1982 that was streamed online for 10 hours.

Even the Feast of the Black Nazarene on Jan. 9 was attended by only around 500,000 devotees who wore masks and face shields, and were bombarded with constant reminders to observe social distancing.

Out of fear that it would turn into a superspreader event, the annual traslacion was called off by authorities and the local government. To avoid crowds, masses for the feast day were celebrated at 15 churches in Manila, with attendance limited to 400 people per Mass in each church.

But with the gradual easing of quarantine restrictions, some religious traditions have been allowed to resume by authorities but with attendance strictly limited to a fraction of the venue’s capacity.

One of these was the “Simbang Gabi” or dawn Masses celebrated for nine consecutive days before Christmas Day.

This practice, according to Fr. Antonio de Castro of the Loyola School of Theology, is a kind of “ex-culturation”—something that rises from culture and becomes evangelized.

The “spin,” as known by most Catholic Filipino families, is the practice of religiously attending all nine dawn Masses in the belief that one’s wishes and prayers will be granted, as more sacrifices mean greater blessings.

This kind of devotion, however, is not only observed by Catholics in the Philippines. It is also practiced worldwide and was even recognized by Pope Francis when he celebrated his first dawn Mass in Rome in December 2019.

“I think what the Pope did was to give recognition to the Filipinos’ life of faith. It wasn’t a simple acknowledgment. In a sense, he was presenting our customs as appealing and acceptable. And that maybe, others can also do the same in their own countries,” De Castro said.

(“Fiesta: Ang Makulay na Pananampalatayang Pilipino” may be viewed through Jesuit Communications’ Vimeo page. Those interested may either purchase the film for $5 or rent it for 24 hours for $2.)

For more news about the novel coronavirus click here.


What you need to know about Coronavirus.


The Inquirer Foundation supports our healthcare frontliners and is still accepting cash donations to be deposited at Banco de Oro (BDO) current account #007960018860 or donate through PayMaya using this link .

Don’t miss out on the latest news and information.

Another Coup Against Previous Coup