A new credit card reader is the kind of thing that can cause a minor sensation at the Little Popcorn Store in downtown Wheaton.

It still doesn’t have a cash register. Loose change and dollar bills go in an old muffin tin used since the earliest days of the business.

Not so long ago, the shop started taking credit cards, a necessity in the COVID-19 era. It’s about the only modern update to a Wheaton landmark since longtime owner Bill Wakefield died in August 2019, and his sister, Donna, carried on the family tradition.

“I made a few changes that I know my brother wouldn’t be overly thrilled with,” she said. 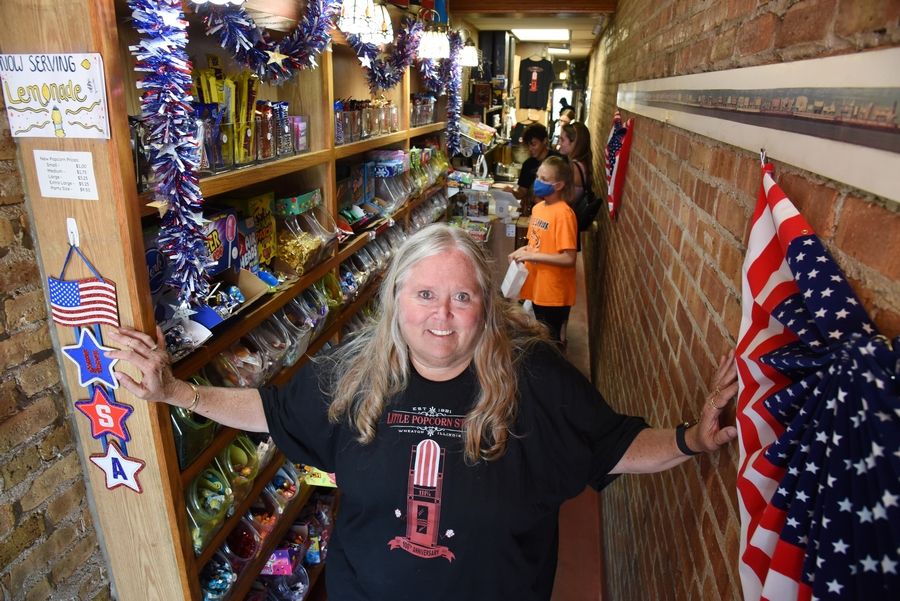 Donna Wakefield can touch both interior walls of her Little Popcorn Store in downtown Wheaton. The store is celebrating its 100th anniversary this weekend.
– Paul Valade | Staff Photographer

But the rest of the Little Popcorn Store remains a shrine to small-town life, a time capsule of Wheaton history, a place that looms large in collective memories despite its physical size, so narrow you don’t even have to stretch your arms out to touch the walls.

Donna Wakefield made a promise to her brother, sick with cancer, to keep it that way and bring the little store — 49 inches wide, 64 feet deep — to a big anniversary.

“He had to make it to 100 years,” she said. “And that was one of the things that we talked about and that I would make sure we had a 100-year celebration.”

Wakefield has lived up to her word. She designed a keepsake Christmas ornament for the centennial this year. She’s offered other commemorative items, monthly drawings and specials. She dusted off and displayed store artifacts, the oil tub and cash book that belonged to Erma Newland, daughter of the original owner, E. Claire “Popcorn” Brown.

Although the anniversary of the opening date officially falls on Jan. 6, 1921, Wakefield wanted a blowout celebration in the summer.

So on Saturday, Wakefield will give away thousands of posters, serve free popcorn to the first 100 visitors and honor her brother.

If you grew up in Wheaton, a lifetime of trips to the popcorn store began around the age of the little boy outside the door with his family Thursday morning, cupping his hands to the glass and knocking to get inside. 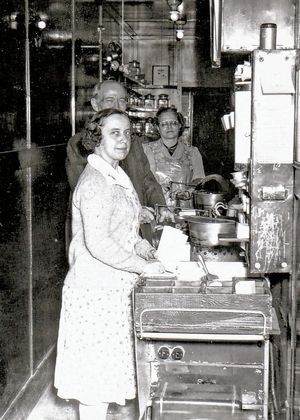 Erma Newland, the daughter of the original owner of the popcorn business, ran the store before the Wakefield family took it over in 1979.
– Courtesy of Donna Wakefield

As you got older, your parents gave you a buck or two to spend on penny candy. Then you might have landed a job there in high school.

And once you got married, if you really loved the place, you took wedding pictures in front of the shop, wedged between the brick exterior walls of a religious store and a hair salon.

“We get people in constantly with the ‘I came here as a kid, and now I’m bringing my grandchildren,'” Wakefield said. “We get all of those stories.”

She, too, grew up visiting the store when Newland ran it.

“I can remember coming here as a kid and Erma being in here and getting our little bags of popcorn,” said Wakefield, 64, a Wheaton native who now lives in Oak Park. “And we got a little plastic toy with them, and that was like a big thing for a kid.” 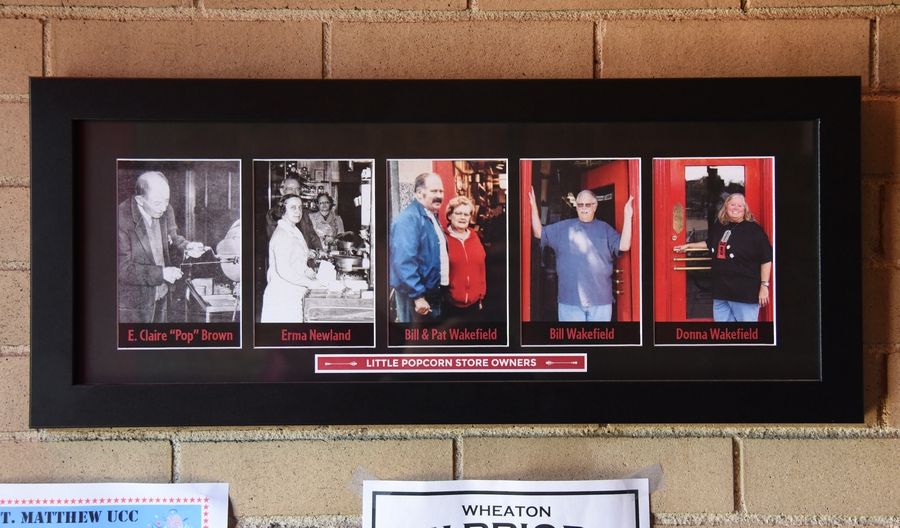 Photos of current and past owners of the Little Popcorn Store hang on the wall of the downtown Wheaton icon.
– Paul Valade | Staff Photographer

In 1969, her parents, Pat and Bill Wakefield, started a hamburger restaurant, Front Street Junction, just down the block, where Graham’s Chocolates is today. They were fascinated with the popcorn shop, that “there’d be lines, and it was always busy, and it was so little,” Wakefield said.

When it became available, her family took over the business in 1979 and gave the store its fire-engine-red front entrance and striped awning, just like a popcorn box. It was a time when the downtown had family-owned pharmacies.

Her brother, the friendly face and laid-back personality behind the store for decades, knew everyone and everything going on downtown.

“He walked around town every day,” Wakefield said. “He talked to everyone he knew.” 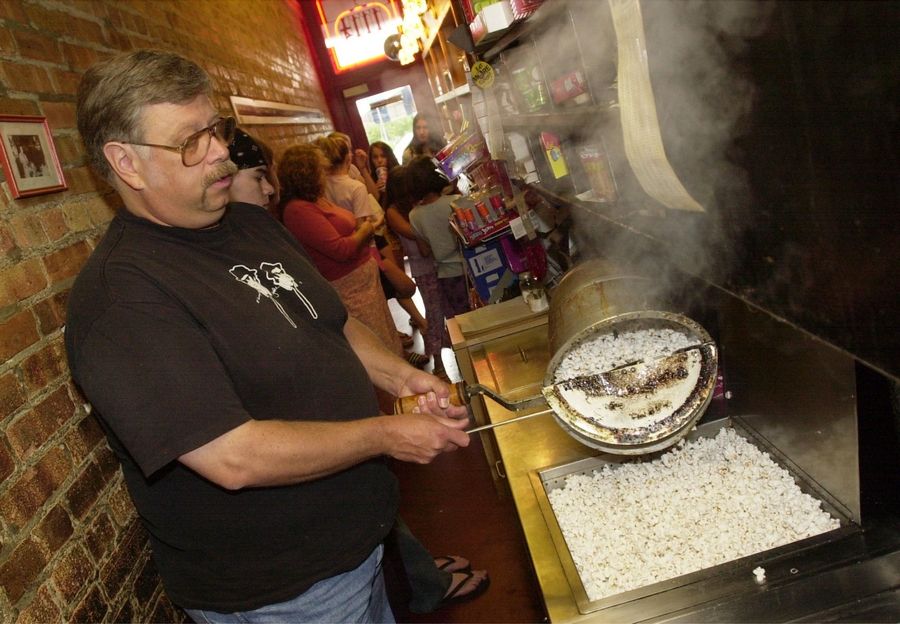 Bill Wakefield ran the Little Popcorn Store in Wheaton for decades before he died in August 2019.
– Daily Herald file photo

His presence is still felt inside the store. His picture sits on a shelf next to what passes for a “menu” on the wall: Four sample sizes of popcorn bags from small ($1, tax included) to extra large ($5.25).

For much of the pandemic, the store could only accommodate four customers at a time. And yet in this year alone, it’s had about 43,000 people file through what’s essentially an alleyway with a roof, Donna Wakefield said.

Her brother typically didn’t track such numbers. But she applies data and research in her “other life” as a professor of special education teacher preparation at National Louis University in Lisle.

With her bookkeeping, Wakefield calculated another impressive number for the cramped confines of the store.

“We still sell about 10 tons of popcorn a year,” she said.

Through the years, the store has adhered to a classic, no-fuss recipe for making popcorn.

It starts with white corn, which produces a tender, sweeter popcorn. Eyeballing cottonseed oil. Sprinkling a quarter teaspoon of salt. Popped in batches, enough to fill a large bag, over a gaslit stove.

And that’s it. The popcorn isn’t soggy. It isn’t greasy. 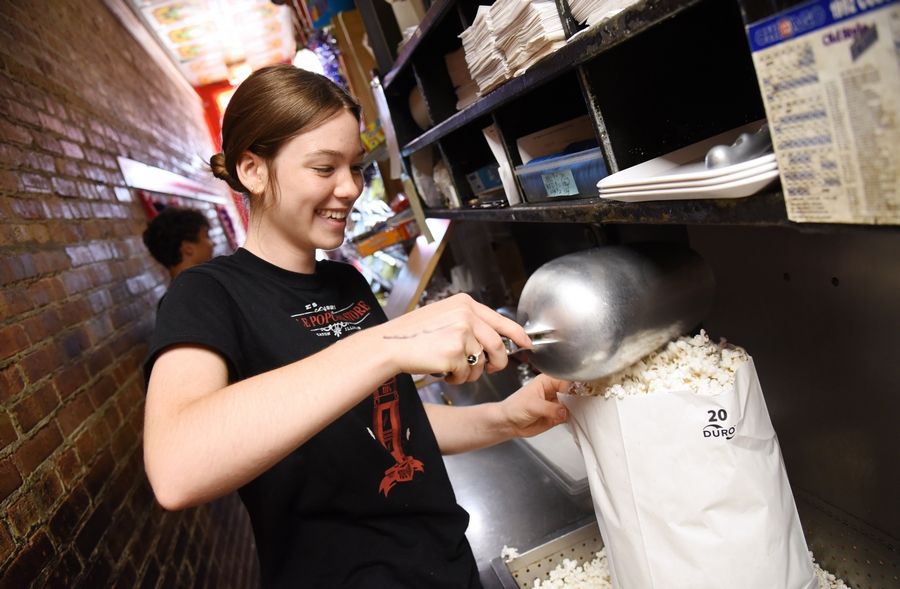 “This is really crunchy, and it doesn’t get the kernels in your teeth,” said Sadie Chelsen, a Wheaton North High School student who works in the store with other teens.

The timeless popcorn flavor and retro candy — the store carries Mary Jane bars and Bull’s Eyes — keep customers cramming inside on a typical summer day. So expect to stand in line for the anniversary celebration.

“We already have people arguing over who’s going to be first in line, talking about how early they’re going to get here for it,” Wakefield said. 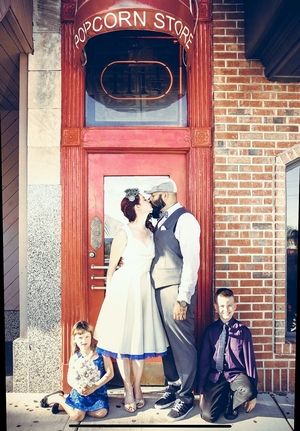 Wedding parties celebrate in front of the Little Popcorn Store in Wheaton.
– Courtesy of Donna Wakefield

And when it’s over, what does the future hold? Like her brother, she doesn’t mind the tight squeeze, never felt claustrophobic in the store. She’s there every day, in between teacher meetings and research presentations.

“My goal has been to get through the 100th year and kind of reassess, but everything’s going well,” she said. “As long as I have good workers, and I have great kids working for me, we should be able to keep going.”