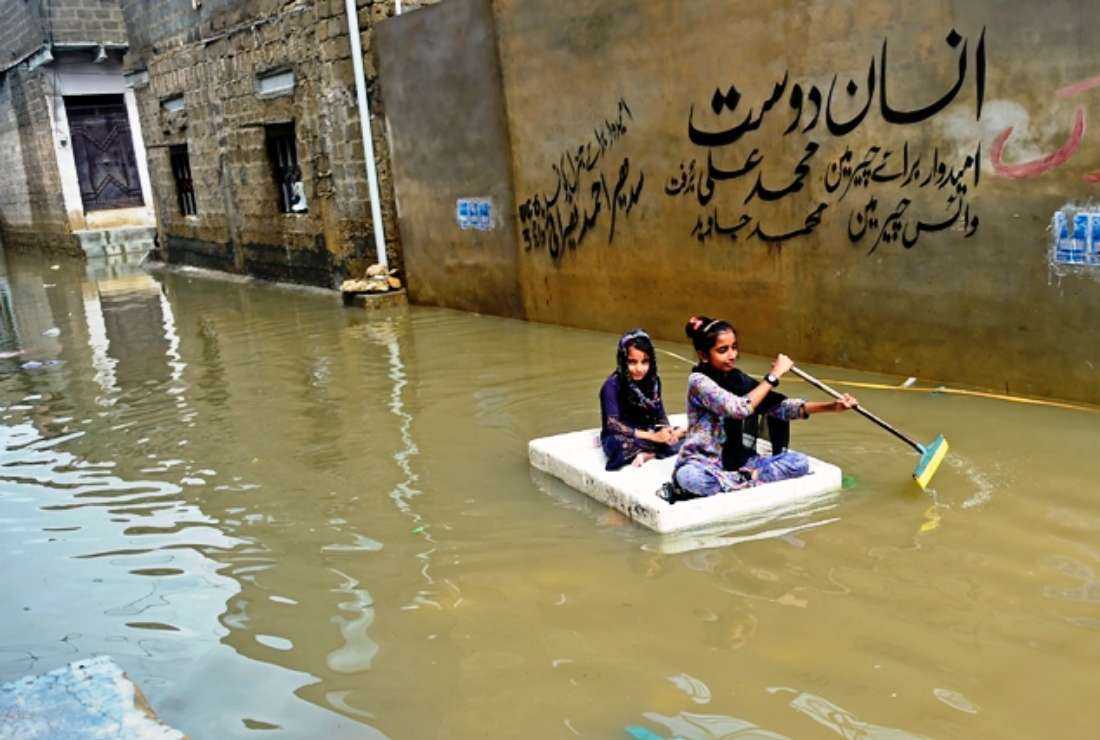 Girls paddle a makeshift raft across a flooded street after heavy monsoon rains in Karachi on July 26. Pakistan is about to celebrate 75 years of independence but urgently needs billions of dollars infused into its foreign reserve to deal with emergency situations and ward off payment defaults. (Photo: AFP)

Will Pakistan default on its foreign debt like Sri Lanka? That’s a question we are increasingly hearing as the cash-strapped South Asian country prepares to celebrate 75 years of independence this month.

The writing is on the wall. The Pakistani rupee witnessed its worst month since 1972, amid a dollar shortage and concerns in Islamabad over a delay in an International Monetary Fund (IMF) bailout program.

The Pakistani rupee crashed 17 percent in July to close at 240 against the US dollar at the end of the month. It was the biggest monthly drop in history.

The current account deficit swelled to $17.4 billion in July-June (the fiscal year 2021-22) from $2.8 billion a year ago due to hefty imports amid a spike in commodity prices, especially oil. The inflation rate topped 24 percent in July.

In a rare move, Pakistan’s powerful army chief General Qamar Javed Bajwa has reached out to US Deputy Secretary of State Wendy Sherman, appealing to Washington to use its influence with the IMF to secure an early release of a crucial $1.7 billion installment to help Pakistan.

Pakistan’s central bank governor rejected market concerns about the worsening liquidity crunch as “overblown,” but Sri Lanka’s default on its foreign debt in May continues to stoke fears in South Asia.

“The government needs a long-term plan, a permanent solution to ensure stability in the lives of the people”

Church leaders are getting nervous as they feel the early crunch. Father Younas Shahzad, vice provincial of the Dominicans in Pakistan, is concerned about meeting the expenses of their 53 students under various levels of formation in two different houses in Karachi, Lahore and Multan.

“We’re badly hit due to the rise in prices in the middle of our budgetary year.  I have several financial requests but am stuck as our resources are very limited. The government needs a long-term plan, a permanent solution to ensure stability in the lives of the people,” he told me.

Christian researcher Asif Aqeel posted a sarcastic response to the economic implosion. “How can we get rid of American slavery if the value of our rupee is only to be determined by the dollar,” he said in a Facebook post.

Aqeel was obliquely referring to former prime minister Imran Khan’s allegation that America was behind the no-confidence motion against his government in April.

Blaming the US is a tried-and-tested tactic in Pakistani politics. The relations between the two countries have been troubled in recent years, mainly over the issue of neighboring Afghanistan, now run by the Taliban.

Things were not always like that. Many Pakistanis hold the view that intermittent military rule, 32 years in total, offered golden periods of foreign aid especially during the Soviet-Afghan War and the American-led war on terror. The establishment enjoyed a strategic pact with the US for a steady flow of weapons and aid.

“Christians are mistakenly associated with the West, making them vulnerable whenever the winds of anti-Americanism begin blowing across Pakistan”

The aid flow was slow during the 43 years of the civilian rule of elected governments, which resisted being part of any conflict. The tense relations have now forced USAID, the world’s premier international development agency, to stop funding its partners in Pakistan, including some Christian organizations.

A news agency, running the only English news portal on minority issues, went bankrupt last month in Lahore. Sadly our political leaders have a record of sidelining issues on the ground, especially of religious minorities, in their blind pursuit of power.

Christians are mistakenly associated with the West, making them vulnerable whenever the winds of anti-Americanism begin blowing across Pakistan. Religiously motivated mobs and suicide bombers have attacked Churches and Christian settlements, blaming either the US intervention in Afghanistan or the American program of drone strikes in tribal areas of Pakistan.

Violence against religious minorities has further damaged Pakistan’s tourism sector, limiting its foreign currency income. Tourism’s role in our economy stood at a meager 5.9 percent in 2019, according to one official estimate. The outbreak of the Covid-19 pandemic direly further affected the tourism sector.

As Independence Day approaches, we Christians in Pakistan, join our Muslim brethren in praying for a peaceful and progressive Pakistan where the ideas of universal humanism and a sense of equality will hopefully reign supreme.

This long-awaited miracle is possible only when our rulers plan for economic revival with a sense of humanity, keeping religion out of the polity and economy of the nation.

“The political use of violence against religious minorities, a phenomenon very peculiar to Pakistan, has to come to an end”

We also hope for equal access to justice as the streets across the major cities get decked up in anticipation of the nation’s platinum jubilee on Aug14.

Before that, Pakistan will celebrate National Minorities Day on Aug 11.

It is actually a day that honors the services and sacrifices of religious minorities, but sadly the day is now reduced to a day religious minorities count the instances of discrimination and persecution, such as misuse of the anti-blasphemy law, forced conversions of non-Muslim girls, and enforced disappearances.

The political use of violence against religious minorities, a phenomenon very peculiar to Pakistan, has to come to an end.

Only then can we believe the dream of a ‘Naya (New) Pakistan’ being sold by former prime minister Imran Khan as he attempts a comeback.

*Kamran Chaudhry is a Catholic commentator based in Lahore. The views expressed in this article are those of the author and do not necessarily reflect the official editorial position of UCA News.